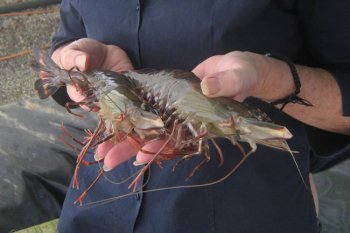 Prawn aquaculture is one of the fastest growing forms of aquaculture and accounts for one-third of the prawn produced globally. The largest producers are: China, Thailand, Vietnam Indonesia and India.

The two dominant species of farmed prawns in the world are Black Tiger Prawns (Penaeus monodon) and Vannamei (Penaeus vanname), Vannamei prawns are not farmed in Australia.

Prawns are grown in saltwater ponds and fed on a pellet diet of fish meal, fish oil and plant proteins like soy beans. Ongoing development of prawn nutrition and genetic selection is resulting in better feed utilisation and a reduced proportion of fish meal and fish oil in the prawns diet. Better feed utilisation means that prawns convert more of their feed into body mass; this makes them a very efficient animal to farm when compared to chickens, pigs, beef and lamb.

On average, a prawn takes four to six month to grow to a harvestable size; they are harvested by draining the pond or in traps. The best situation is when the prawns are processed within an hour of harvest, which is common in Australia. 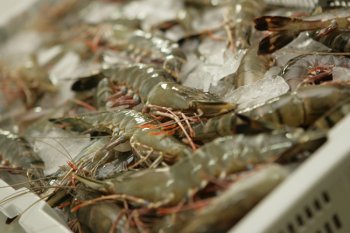 The two main species of farmed prawns in Australia are Black Tiger (penaeus monodon) and Banana Prawns (Fenneropenaeus merguiensis), which are produced by one farm called Seafarm, and sold under the brand name Crystal Bay Prawns. Australian prawn farms extend from Northern NSW up to Mossman in Far North Queensland.

In Australia farmed prawns account for approximately 15 – 20% of total annual production. Wild caught production of prawns in Australia and globally is forecast to remain stable or decline from current levels; accordingly farmed prawns will make up a growing proportion of the prawns we eat.

What do Prawns eat?

Prawns are omnivores in the wild, farmed prawns are fed a pellet that looks like a chicken pellet. The ingredients are: fish meal, fish oil and plant protein like soy beans. Farmed prawns also forage in the ponds eating natural zoo plankton etc.

How long to prawns take to grow?

Prawns are harvested when they are 4 to 6 months old.

Where are prawns farmed in Australia?

The majority of farms are located in Queensland.

How are prawns farmed?

Prawns are farmed in saltwater ponds, approximately 1ha in size and 1.5m deep.